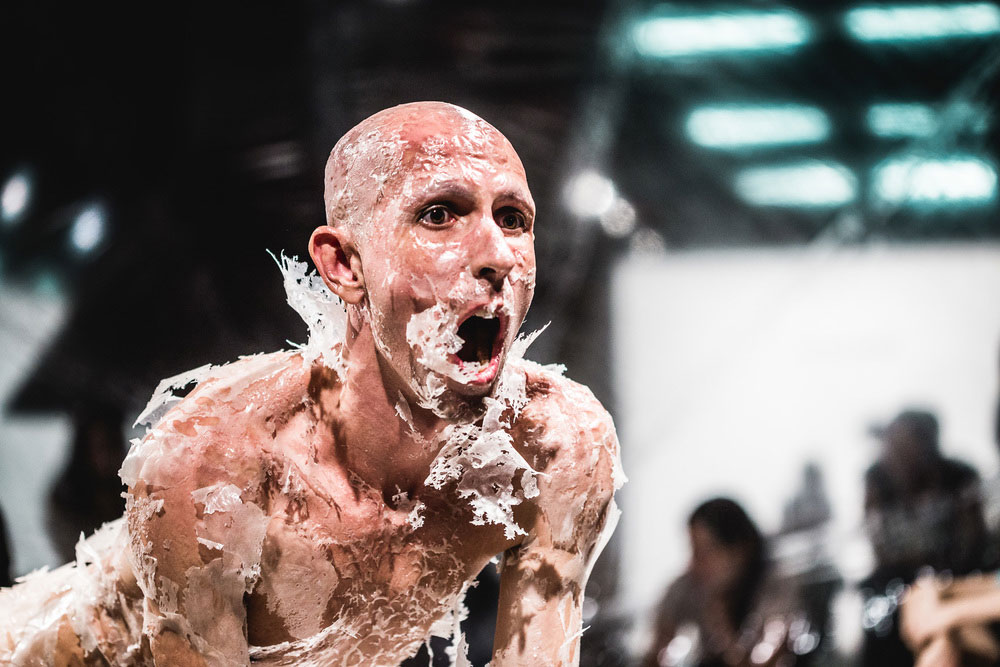 DNA of DAN is a Maikon K´s dance installation inspired by the serpent archetype. The performance takes place inside an inflatable and transparent ambiance, created by Fernando Rosenbaum. First, a substance is applied on Maikon´s body, and he stays immobile while it gradually dries. After this phase of the performance, he starts to move. The audience can then go inside the inflatable structure and remain there. The development of another skin over time, the artificial environment and the relationship with the audience: these are the main resources that contribute to the power of this performance, in which the performer’s body undergoes a continuous transformation.

Maikon K acts on the edges between performance, dance and theater. The subjects of his work are the body and its ability to modify perceptions. Influenced by the shamanic worldview, the artist weaves realities through songs, non-verbal sounds, visual signs and ritualized actions. Some of his creations are Ancestral Body, Terrarium and The Solar Anus.

DNA of DAN premiered in Curitiba (PR), on the lawn of the Museu Oscar Niemeyer (MON). Throughout the last three years, the show has been presented in several contexts. In 2015, invited by the Serbian Artist Marina Abramovic, it was part of the exhibition Terra Comunal, at Sesc Pompéia (SP), and, in 2017, it went on tour around Brazil, as part of Sesc’s project Palco Giratório.

“Intimate and majestic ritual: we see, hear, smell and touch the creature who’s falling apart till it becomes another. We become the new skin, which must also be abandoned eventually. Who has never experienced the feeling of not fitting anymore inside oneself?”
ANDERSON DO CARMO – ARTIST AND DANCE RESEARCHER – Jornal Noticias do dia- Florianópolis – 08/12/2017