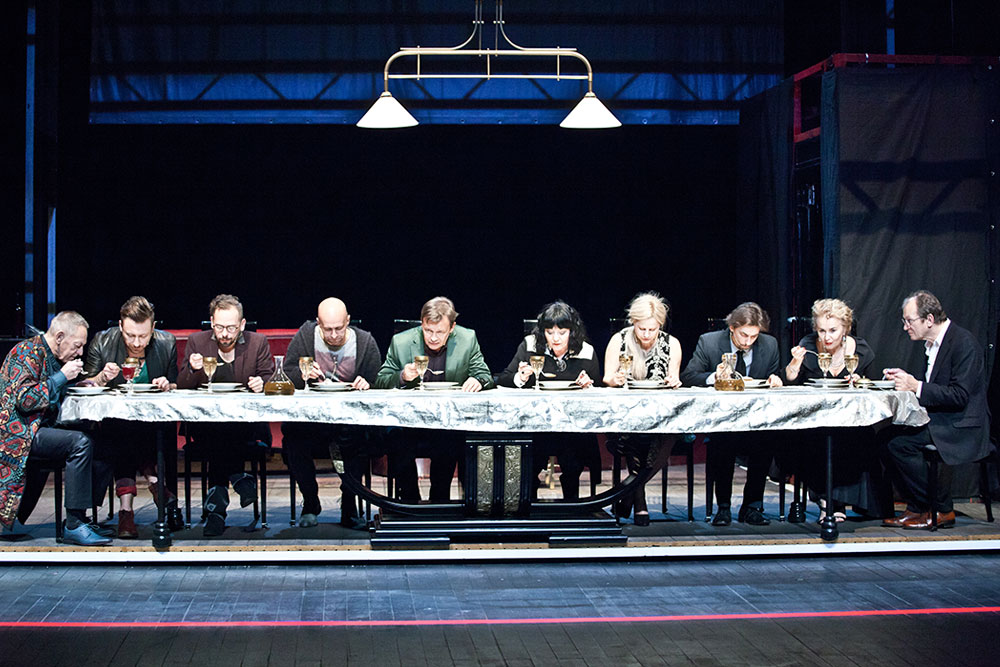 “An artistic dinner” of old friends who once were a part of an informal bohemian group turns into a wake after the death of one of the characters. The participants are not focused on the deceased, though, they allow themselves to take “liberty” to verbalize hidden and unconscious fears, claims, injuries, and demands. The bohemia of the olden days turns rebel energy into state contracts, good paychecks, decorations, and positions. The production shall be a radical journey deep into the modern world, under the surface of social forms and cultural conventions, in search of what only starts to appear on the line of horizon. The production that touches on the problem of freedom, which is illusory in our life, and constraint, which is the natural condition of a human being. It also includes questions concerning artists and their role in the modern world. Krystian Lupa, one of the most important directors in the world and considered a living theatrical legend, returns to Santiago a Mil to present Wycinka Holzfällen (Woodcutters), a theatrical dramatization of the controversial book by writer Thomas Bernhard. Highly critical of the artistic elite, the play is a radical journey through the modern world, questioning cultural forms and conventions using 13 characters who talk about the role of art, freedom and subordination to a higher power. All this is accompanied by impressive staging, through which Lupa unveils his dramatic, outstanding and rich esthetic.

Krystian Lupa (Poland, 1943) is a Polish theater director and one of the great masters of the contemporary performing arts. Having studied the arts, cinema and theater, Lupa began directing at the end of the seventies. Fascinated by authors such as Dostoievski, Rilke, Chéjov and, in particular, the Austrian Thomas Bernhard, he has translated and dramatized countless texts, staged, designed sets and directed several plays. Between 1980 and 2013, he was director of the Stary Teatr in Caronia, where he put on some of his most important productions. He has been awarded the Austrian Cross of Merit, the French Order of Arts and Letters and the Ludwik and Europa awards, among many others. The Polish Theatre (Teatr Polski) in Wroclaw is the oldest drama theatre in Wroclaw. In 1945 a pioneer group came to Wroclaw with Bolesław Drobner and an experienced technical worker Adam Kabaja, who was in charge of preserving the properties of Wroclaw theatres. Kabaja took care of the only theatre building that survived the war – the old City Theatre, the Opera. Currently, the Theatre in Wroclaw has 3 stages: Jerzy Grzegorzewski Stage (classics in modern arrangements), Na Świebodzkim Stage (theatrical experiments) and Chamber (Kameralna) Stage (comedies and music spectacles). The current director is Cezary Morawski.