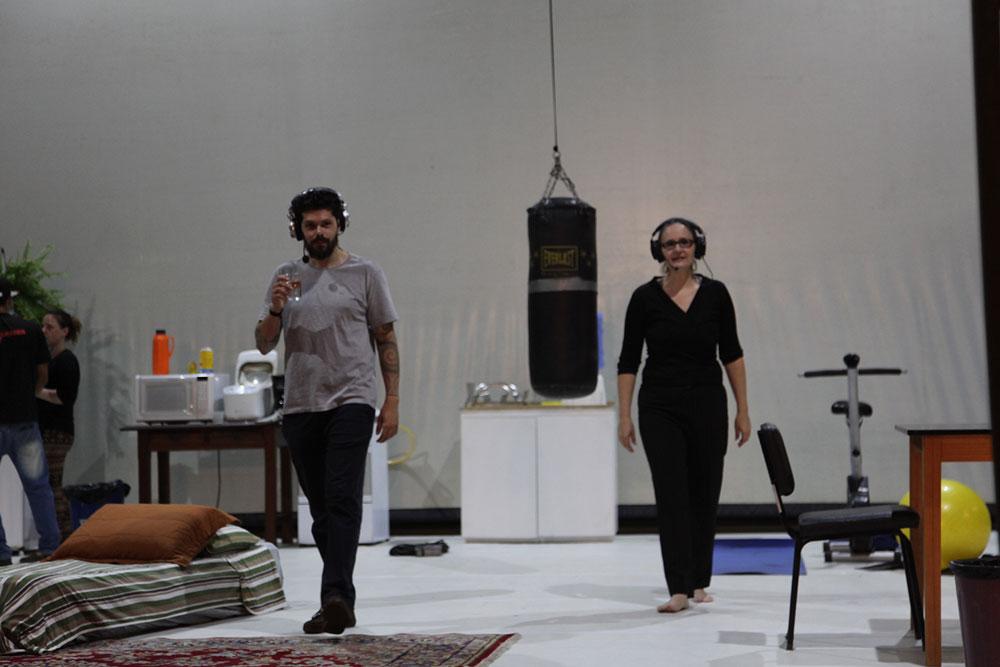 Two performers fully recreate the Globo Network’s programming for 24 hours, starting with the broadcast of the show Fantástico, on Sunday night, and finishing at the end of Jornal Nacional, on Monday night. With headphones that isolate them from the outside world, they receive the audio of the broadcast including news, movies, soap operas, auditorium programs, advertising and vignettes. On the stage, a “survival kit” – refrigerator, stove, food, bathroom, sofa, bed, chair – a “game-kit” – deck, boxing bag, gloves, shuttlecock, ball, bladder – and a “acting-kit” – wig, makeup, masks and costumes. While mimicking or reinterpreting the programming, always reproducing the audio they receive on their earphones, they perform everyday tasks such as cooking, going to the bathroom, resting on the couch, playing. Idealized and directed by Nuno Ramos, We’ll see you here operates through shifting the players – the actors will perform what is a representation on itself, only almost never perceived as such, due to the truths engineering and naturalization which the television imposes on us.

Last year, the visual artist, composer and writer Nuno Ramos created his first work for the internet. He edited the images of the national news program, Jornal Nacional, that announced the impeachment of Dilma Rousseff and the audio leakage of Lula with the former president and combined it in such way to recreate the lyrics and melody of Lígia, written by Tom Jobim in the 1970s. Nuno named his work Lídia. In the video, the presenters William Bonner and Renata Vasconcelos sing the words of the song, in tune with the voice of João Gilberto. This work offered the insight for the performance We’ll See You Here, held for the first time last November in Porto Alegre (RS), at the Teatro Renascença.

Nuno Ramos was born in 1960, in São Paulo, where he lives and works. He graduated in philosophy from the University of São Paulo and began painting in 1984, when he joined the group of artists from the Casa 7 studio. Since then, he has exhibited regularly in Brazil and abroad. He participated in the 1995 of the Venice Biennale, representing the Brazilian pavilion, and in 1985, 1989, 1994 and 2010 he exhibited in the International Biennials of São Paulo. In 2006, he received the Barnett and Annalee Grant Award Newman Foundation. His first book, Cujo, was published in 1993. He has also published titles such as Pão do Corvo, Ensaio Geral, Ó, Mau Vidraceiro, Junco, Sermões and, most recently, Adeus, Cavalo, released in 2017.