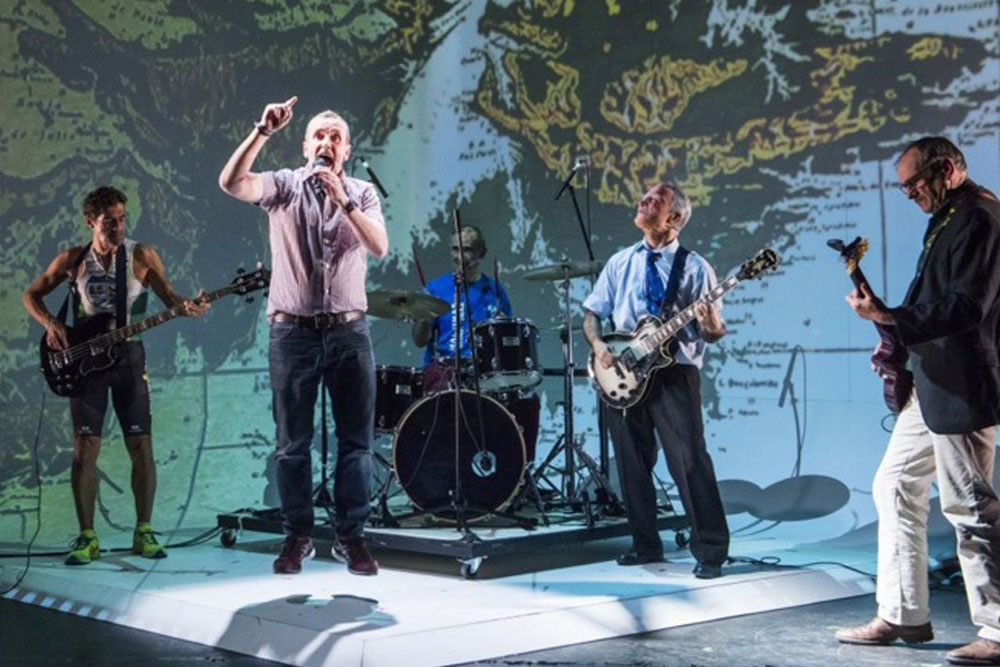 Check out the text by Ana Bernstein (UNIRIO) (only in Portuguese)

CAMPO MINADO is a project that brings together Argentine and English veterans of the Falklands War to explore what was left in their heads thirty-five years later. In a film set turned into a time machine the ones who fought are teleported into the past to reconstruct their war and aftermath memories. Lou Armour was on the cover of every newspaper when the Argentines took him prisoner on April 2nd and is now a special needs teacher. Rubén Otero survived the sinking of ARA General Belgrano and has now a Beatles tribute band. David Jackson spent his time at war listening and transcribing radio codes and now listens to other veterans in his psychology practice. Gabriel Sagastume was a soldier who never wanted to shoot and is now a criminal attorney. Sukrim Rai was a Ghurka who knew how to use his knife and works currently as a security guard. Marcelo Vallejo was an aimer for mortar and is now a triathlon champion. The only thing they have in common is that they are veterans. But what is a veteran; a survivor, a hero, a madman? The project confronts different visions of war bringing together old enemies to tell one single story. MINEFIELD looks into the marks left by war, the relationship between experience and fiction and the thousand ways of representing memory.

Born in Buenos Aires in 1976, Lola Arias is a theatre director, writer and performer. She collaborates with artists from different disciplines in theatre, literature, music, film and art projects. Her productions play with the overlap zones between reality and fiction. She wrote and staged Mi vida después, Familienbande, That Enemy Within, The year I was born, Melancholy and Demonstrations, The art of making money, The art of arriving, Minefield and Atlas of Communisms, among others. She also created the exhibition Stunt Double and presented the durational performance Audition for a Demonstration in Berlin, Prague, Athens and Buenos Aires. Together with Ulises Conti she composes and plays music. She has published poetry, fiction and plays and her works for theatre have been performed at numerous festivals including festivals and venues including Lift Festival, Festival d’Avignon, Theater Spektakel, Zurich, Wiener Festwochen, Festival Theaterformen, Spielart Festival, Munich, Alkantara Festival, Lisbon, Under the radar, NY, and in venues like Theatre de la Ville, Red Cat LA, Walker Art Centre, Museum of Contemporary Art Chicago, Royal Court London.