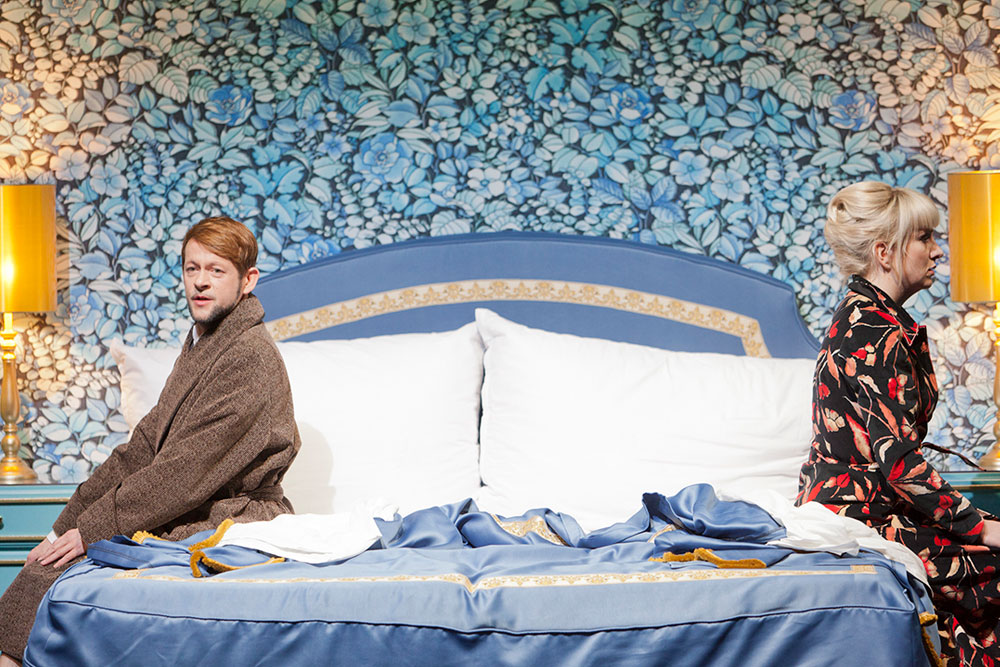 Check out the text by Matteo Bonfitto (Unicamp) (only in Portuguese)

A hotel room, at the center of which sits a “king size” bed, surrounded by blue panelling and floral upholstery – a truly bourgeois, vaudevillian decor. In the intimacy of this room, a man and a woman – accompanied by an older woman – strike up an eclectic musical repertoire, ranging from traditional songs and classical works to “pop music”. According to the pieces they are performing, they outline a few steps of ballroom dance, thus bestowing upon their actions a certain comical dimension. This irresistible zaniness to which Christoph Marthaler invites us is enlivened by the eccentric gestures of the actors. When a man styles his hair although he is bald, when an old woman aunts her senility, or when pop songs are carried by lyrical voices, laughter is everywhere. Incidentally, it is from this last discrepancy that the director extracts the material of his piece. He seeks to create “enharmonics”, compositions that combine different tonalities and create a heterogeneous sound per se. While this sound matter can create a bizarre effect, it is then offset by a more sensitive reality, which relates to human relationships. The desirable peaceful entente of individuals with different personalities is here evoked; however, rather than showing harmonious interactions, it evidences the loneliness, the grotesque conventions and the tragic daily lives of human beings. With “King Size”, Marthaler gives music the lead, thus creating a whimsical show full of tenderness and melancholy.

Born in Erlenbach in the Canton of Zürich, Christoph Marthaler first trained as an oboist and flautist before turning to the theatrical world. He took his first steps at the Lecoq School in post-May 68 Paris. Inspired by these two artistic worlds, he then began to create shows in which music and words are in constant dialogue. His first musical piece, “Indeed”, saw the day in 1980 in Zürich. Several different projects would follow, including a performance at Basel train station in 1980, for the 50th anniversary of Kristallnacht. One year later, he parodied the Swiss national anthem with “Quand le cor des alpages se mue, Suisse, tue, tue!!” (“When the alpine horn transforms, kill, kill, Switzerland!!”), a performance in which Swiss soldiers tirelessly strike up “Die Nacht ist ohne Ende” (“The Night is Without End”). His meeting with the scenographer Anna Viebrock and the dramaturg Stephanie Carp in 1991 would nurture his career thanks to fruitful collaborations. After having staged now-classic pieces such as Pessoa’s “Faust” or Horváth’s “Kasimir and Karoline”, he became director of the Schauspielhaus Zürich from 2000 to 2004. Since then, his creations have succeeded each other on stage, such as “Groundings, a Variation on Hope” in 2004, “Riesenbutzbach. A Permanent Colony” in 2009, “Papperlapapp” in 2010 (a show born of his status as associate artist at the Avignon Festival), “Meine faire Dame. Ein Sprachlabor” in 2012, followed by “King Size” and “Letzte Tage. Ein Vorabend” in 2013. As a director, Christoph Marthaler stands out with his innovative aesthetics, anchoring his plays in the scenery of daily life – such as that of waiting rooms or cafés – thus playing with the forms of representations. He presents ordinary figures in a shattered world, in the throes of existential and relational questions; touching on the human condition with tenderness, humour and humanity. A master of slowness, irony and discrepancy, he has invented an idiosyncratic scenic poetry, made of lyrics, songs and music.