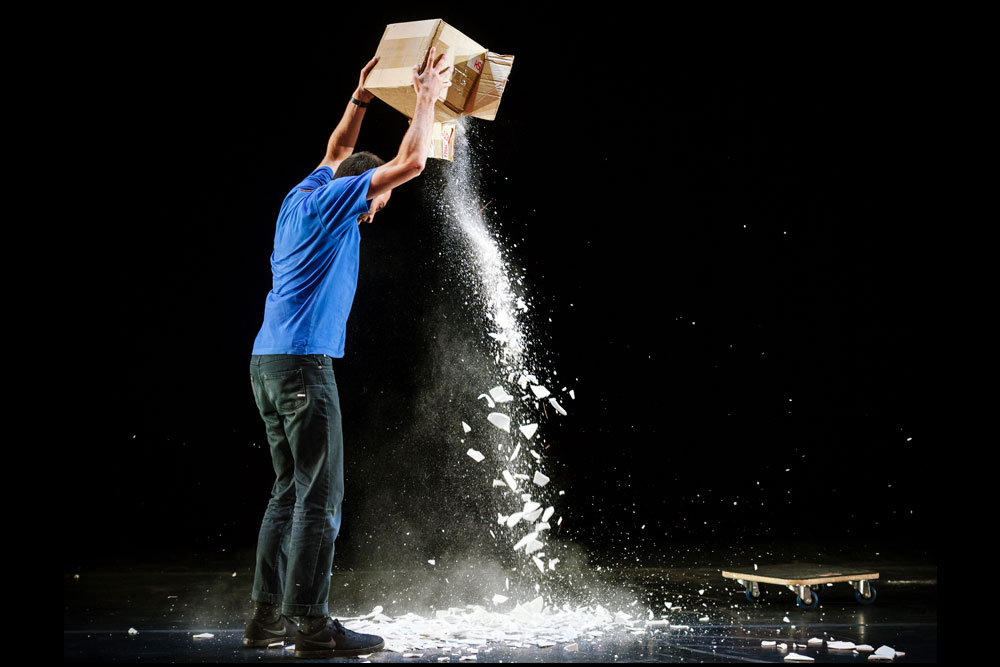 The ancient city of Palmyra was one of the best preserved in the world. Tourists flocked from around the world to look at the iconic temples of Bel and Baalshamin as well as the Arch of Triumph. Until 2015, when ISIS gained control of the city, destroyed its temples, looted its graves and used its amphitheater to stage executions. PALMYRA is an exploration of revenge, the politics of destruction and what we consider to be barbaric. What makes people destroy things like that? For the performers, even if the subject is tough, humor is fundamental in setting a different place for the spectator before the spectacle.

French director, Bertrand Lesca was Peter Brook and Declan Donnellan’s assistant on several international tours. He is one of the founding members of the FellSwoop Theater, which explores the relationship between music and performative collective creation, collaborating with composers and artists in the development of new works. Nasi Voutsas graduated from the East 15 Acting School, where he studied acting and contemporary theater. He is co-founder of ANTLER, company for which he writes, acts and plays. Since 2015, the two creators work together. Artists associated with MAYK (Bristol, UK), the first show they created together was Eurohouse (2016), about Brexit, the economic crisis in Greece and nationalism. Eurohouse was nominated for the Total Theater Award 2016 and has been shown over 50 times. Palmyra debuted at the Edinburgh Festival in 2017 and was awarded the 2017 Total Theater Award for Innovation, Experimentation & Playing with Form. The show also received other prizes, such as the Stockholm Fringe 2017 Grand Prix, the Mess Festival Prize (BE Festival) and the ‘Best of BE’ Festival Award, and was included in The Top 10 The Guardian’s Theater of 2017.