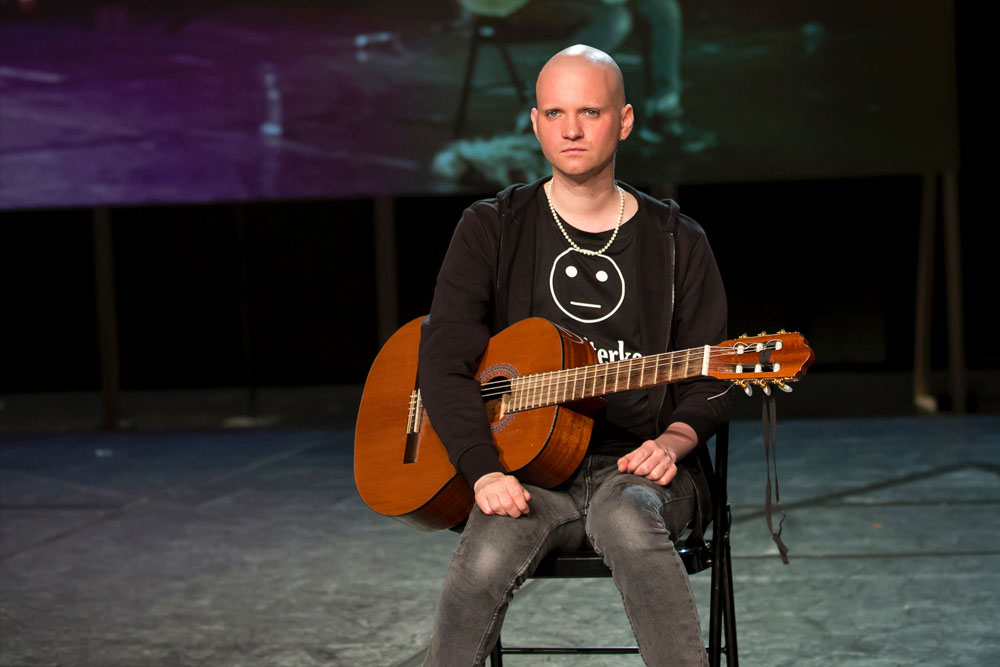 In Hamlet author and director Boris Nikitin rewrites the most famous of all theatre pieces and transforms it into a contemporary performance. In a mix out of experimental documentary play and music-theatre the enigmatic performer and electronic musician Julian Meding takes over the part of a contemporary Hamlet who revolts against reality. Supported by the award-winning baroque-quartet Der musikalische Garten Meding takes himself to a tour de force on stage by introducing and exposing himself to the public. Meding, giving details from his life story, revolts against the audience, like Hamlet against his royal court he attacks the public, agitates, flirts with him, mocks him and tries to seduce him. Time and again he seizes the microphone, he starts to sing: raw electropunk, sketchy cover songs, a Hollywood ballad. Words, sung as fragments of emotions. Medings/Hamlets performance dazzles between offensive dilettantism and vain jokes, exaggerated gestures and confrontational pose. Is this Meding? Or Hamlet? Is he serious? Or is it all a game? “Is he or isn’t he”? Is he not both at the same time, eventually? The performance crossfades documentary and fiction into a contemporary version of Hamlet in which the conflict zones illusion and reality, individual and society interplay.

The theatre director, author and essayist Boris Nikitin, born in Basel and a son of Ukrainian-Slovakian-French-Jewish immigrants, writes and directs in the international independent theatre scene as well as in established city theatres. He is the initiator and artistic director of the festival “It’s The Real Thing” that takes place biennially in Basel/Switzerland. For the last ten years his theatre works and festivals have been reflecting the representation and production of reality and identity in politics, economy, religion, personal stories and in the arts. Nikitins pieces, texts and programs always look for the dazzling boundary between performance and illusion-theatre highlighting the ambiguous and the potential in which individuality and the capacity to act become thinkable newly. In 2017 Nikitin was given the J. M. R. Lenz-dramatist award by the city of Jena, Germany.