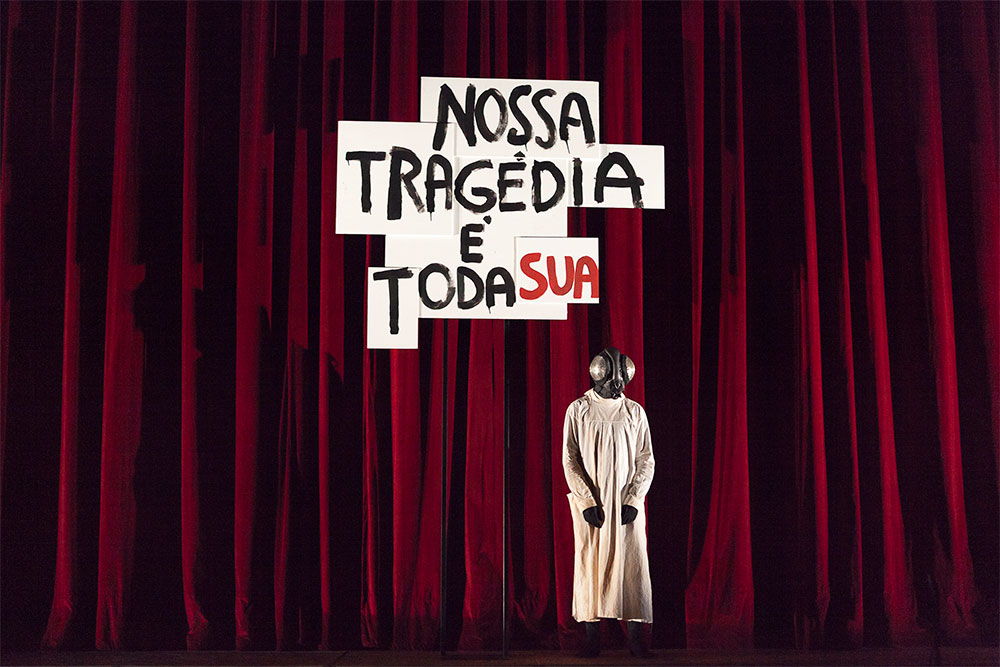 The show tells the story of Eulálio D’Assumpção, who at the age of 100, is left lying on a stretcher in a public hospital hallway. He is the heir to a family that arrived in Brazil with the Portuguese court, therefore he has aristocratic ancestors, a slave-owner grandfather, a corrupt senator father, a guerrilla fighter grandson and a drug dealer great-grandson. Big spender, alienated and contradictory, he is now completely bankrupt and faces the tragic catastrophe of the health care system, built by an elite of rentiers to which his family belonged.

The work is an aesthetic elaboration on the unique experience of the time in Brazil, sitting where everything is transformed only to repeat itself in its filthy self-eating structure. Raving in his last moments of his life, the protagonist undergoes crucial events of the Brazilian history, in a pandemonium with no boundaries separating the inner and outer world, past and present, memory and imagination, religion and power, individual and society, politics and mythology.

Spilt Milk had successful seasons at Sesc Consolação (São Paulo) and at the Sesc Ginástico Theater (Rio de Janeiro), taking part in the Mirada Extension, of the MIRADA – Ibero-American Festival of Performing Arts 4th edition, an overview of the contemporary production and their creators. The show was also featured in important national theater festivals, including Curitiba, Porto Alegre, Recife, among others. Elected by the Folha de São Paulo and O Globo newspapers as the best show of 2016, it was nominated three times to the Shell Award – for best actress (Juliana Galdino), direction (Roberto Alvim) and lighting (Domingos Quintilano) – and one time to the APCA award, in the best actress category (Juliana Galdino).

“Director Roberto Alvim, at the top of creative maturity, dared to play with undisputed icons – and offers a powerful spectacle to the audience.”
Dirceu Alves – Veja Magazine

“Alvim strips away the nostalgic content from the book as a dissection to leave only the bones: the generational chain of power that establishes the history of the country.
Luciana Romagnolli – Ilustríssima – Folha de São Paulo