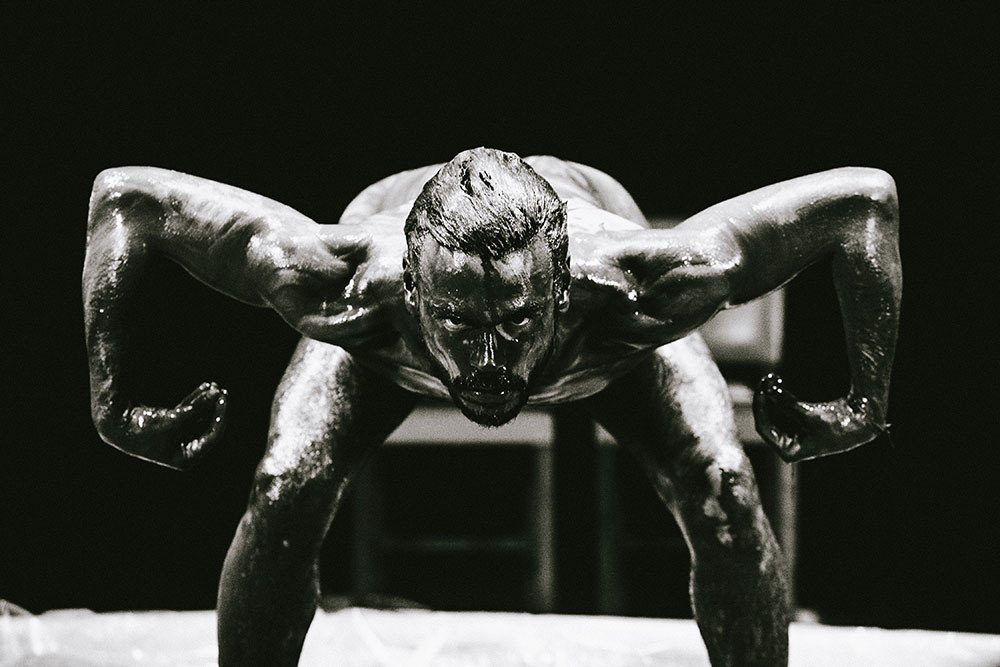 Overdrive Crab tells the story of Cosme, a former crab picker in the mid-nineteenth-century at Rio de Janeiro’s mangrove. Summoned to join the Brazilian army in the War of Paraguay, he goes mad in the battlefield, returns to Rio de Janeiro and finds the city in great transformation. Cosme finds work in the construction of the canal that represented the first city’s important work of sanitation, in the region of the Onze Square. But he goes into crisis again, leaves everything, wanders into the night, delves into delirium. Caught up by a big storm, he becomes, finally, a crab. Directed by Marco André Nunes, the play relates with the work of geographer Josué de Castro and with the manguebeat movement, which emerged in Recife in the late 1990s and having the musician Chico Science as its greatest name.

With four nominations to the Shell Award (for best director, text, actor and actress), four to the Cesgranrio Prize (best show, director, text and actor) and five to the Questão de Crítica Award (best performance, director, text, actress and music director), Overdrive Crab was chosen one of the best spectacles of 2015 by the newspaper O Globo and the Veja magazine.

Aquela Cia de Teatro (That Theater Company) was founded in 2005 in Rio de Janeiro. Their work is characterized by open and collaborative creation processes, and the research on the relationship between theater, music and literature. Throughout 13 years, the group has set up shows such as Projeto K. (about Franz Kafka’s life and work), Sub: Werther (interpretation of Goethe’s The Sorrows of Young Werther, as of the inter-texts of the book A Lover’s Discourse: Fragments, by Roland Barthes), Lobo No1 (based on Herman Hesse’s novel Steppenwolf), Do Artista Quando Jovem (around the literary universe of James Joyce), Outside, a noir musical (inspired by David Bowie’s album artwork Outside), Cara de Cavalo (which narrates the journey of Manoel Moreira, public enemy #1 of Rio de Janeiro in 1964, and his relation with Hélio Oiticica’s work) and Edypop (exploring the imaginary encounter between the most popular Greek hero, Oedipus, and the most tragic pop artist, John Lennon). Overdrive Crab is part of the Rio Trilogy, along with the shows Cara de Cavalo (2012) and Guanabara Canibal (2017).