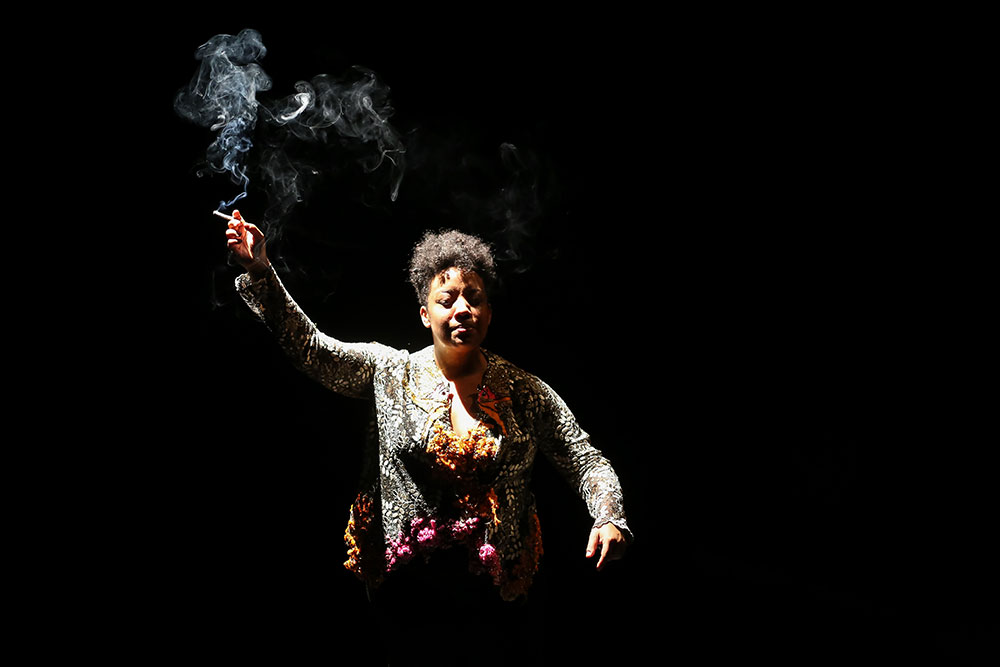 Dazed Flesh is the first solo written and performed by the actress, director and dramaturge Grace Passô. In this play she creates a playground for spoken word and movement, in which a woman’s body feels the urgency of speech, looking for its identity and its sense of belonging. A wandering voice overruns such a body and narrates what she feels as a woman, as a being, what she pretends to feel, what is unsearchable in her. The voice tries to understand what does her body mean to others who see it.

Dazed Flesh was the inaugural production of Grãos da Imagem, a project that gathers productions concerning identity themes. It premiered in 2016, at the Festival of Curitiba, and ran at Sesc Copacabana (RJ) in July and August 2016. In 2017, it was presented at Sesc Pompeia (SP), Caixa Cultural (SP), Sesc Palladium (MG) and Caixa Cultural (BA). It was also part of the program of the festivals Olonadé (RJ); Trema! (PE); Melanina Acentuada (BA); Porto Alegre in Cena (RS);  Festival Nacional de Teatro de Vitória (ES); Cena Contemporânea (DF); and was also presented in João Pessoa (PB) and São José do Rio Preto (SP).

“The voice-woman-body vocalizes each utterance in a particular timbre, what makes the audience laugh and (…) it communicates the disruption of gender categories, just as it does during several other moments related to inherent political and social aspects of globalized societies. There is a slight irony in each vocal register — no doubt, a theatrical practice, but also a performative act to highlight reflections that, through its sharpening textual poetry, aims to lead each body-voice in the audience to a diverse place of speech and liveliness”.
(Marcos Alexandre, Horizonte da Cena – Critic)