Chant for Rhinos and Men 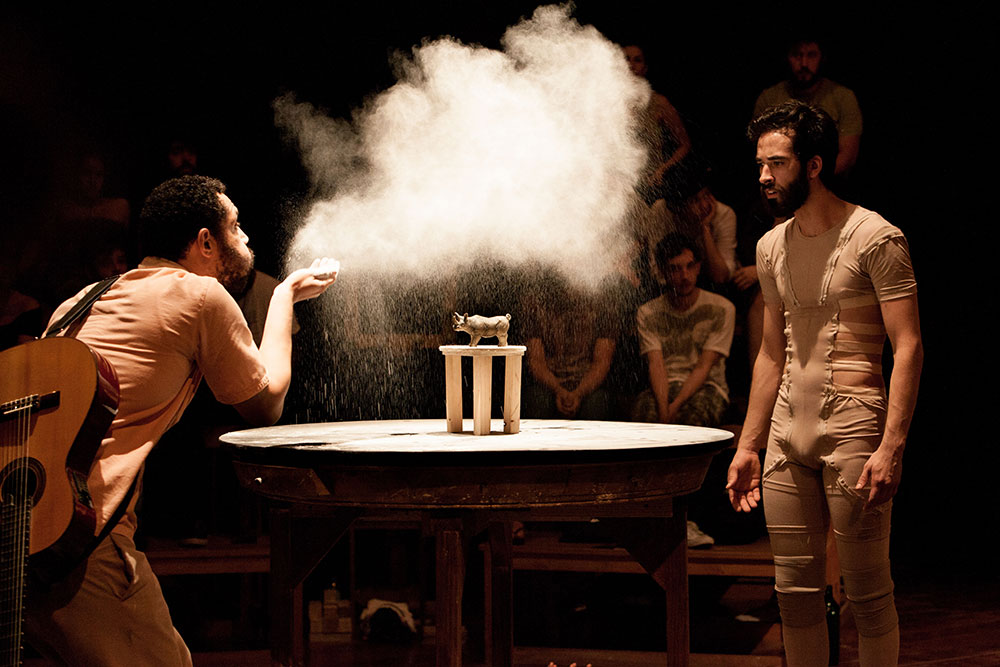 Inspired by Rhinoceros, by Eugene Ionesco (1909-1994), Chant for Rhinos and Men, by Teatro do Osso, proposes a reflection on themes such as hate crimes, racism, worship of beauty, overwork, deteriorating educational standards, absence of dreams and the extinction of humankind. Written in 1959, Ionesco’s play portrays a city in which almost all its inhabitants are affected by a rare disease, that turns them into rhinoceroses. Bérenger, a simpleton man, not suffering from this illness, becomes the only human being on earth.

Chant for Rhinos and Men places the actors in an arena, where they sing the storyline, accompanied by piano and percussion. During the intermissions, videos and testimonies are shown, inviting the audience to reflect on the reasons why, in great metropoles, we act like irrational and violent animals — like authentic urban rhinos.

Could we, human beings, have the desire to become rhinoceroses? It was from this and others questions that Teatro do Osso´s actors, under Rogério Tarifa’s direction, started the creative process of Chant for Rhinos and Men. The show has been presented since the end of 2015 at traditional cultural centers — Galpão de Folias, Itaú Cultural, Sesc Santos, among others —, and, supported by Zé Renato award, it was also presented in São Paulo’s outskirts.

The show was rehearsed for nine months and seals the partnership between the Shell Award winners Rogério Tarifa, William Guedes and Jonathan Silva, members of the Cia do Tijol. Chant for Rhinos and Men was considered one of the best five shows in São Paulo by Guia da Folha, and won the Aplauso Brasil for best group show.

“The cast is the greatest force of Chant for Rhinos and Men. Crossing multiple languages, the performers show the strength of Ionesco’s narrative and its ramifications. Within the context of metamorphosis and animal intrusion, an ocean of themes emerges — metropolises, work, violence and exploitation (…)”.
Leandro Nunes – O Estado de São Paulo – Caderno 2 – 07/28/2016

“This musical assembly is a kind of popular opera that emphasizes the word utterance. And everything happens in an arena. In the circular structure, the public becomes part of the dilemmas and of the critical and collective examination on the subject. It is a forward attitude of great political implication.”
(Paulo Bio Toledo – Folha de São Paulo – Ilustrada – 12/16/2017)