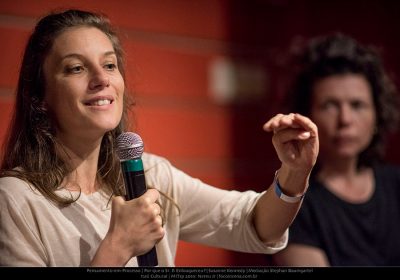 After taking part in the 4th edition of MITsp with the show Why Does Herr R. Run Amok?, the German director Susanne Kennedy returns to the festival to engage in an artistic residence between 19th of February and the 4th of March of 2018, exploring new styles of oral language combined with the precision of physical and vocal expression. Ten Brazilian artists will be chosen to work under the guidance of Susanne, with Dutch performers Suzan Boogaerdt (Herr R. actress) and Bianca van der Schoot conducting the physical preparation. This residence is part of Susanne’s artistic research, which explores the possibilities of uncreative writing, as defined in theater by the American poet and critic, Kenneth Goldsmith.

This style seeks to blend ordinary expressions, dialogues and noises into the scene, in order to broaden the narrative possibilities. The residence will happen from Monday to Saturday, 10AM to 3PM, always in Goethe-Institut. On Sunday, a final experiment will be staged. The activity will have a translator on site.

* This residence is supported by Goethe-Institut, São Paulo.

When: From 2/19 through 3/04, Monday to Saturday, 10AM to 3PM. Final experiment will be staged Sunday (4th), at 11AM.
Where: Goethe-Institut São Paulo (R. Lisboa, 974, Pinheiros, São Paulo – SP)
Target audience: actors, actresses, dancers and performers.