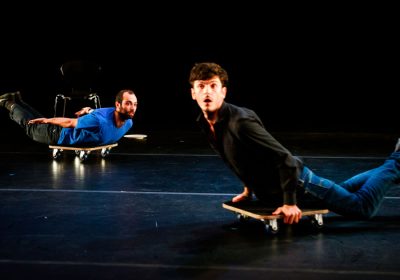 Politics in the room

In harmony with the research developed by the artists on destruction policies, Bertrand Lesca and Nasi Voutsas intend to work, in this two-day workshop, some of the concepts present in the work Palmyra – disagreement, misunderstanding, frustration, hatred and reconciliation – using the stage as a space for artistic expression and political negotiation. How to react to violent seduction? How to regain sociability after an overwhelming conflict in ethical and moral terms? They also aim to work on challenging topics of their new show in creation: how to deal with political debate polarization and the rise of populism in today’s world? Those selected will be invited to physically express themselves about the injustices which arouse them most. The activity will take place in the Squat Aqualtune Independent, a former Butantã School building, abandoned since 2008 and inhabited for nearly two years by almost three dozen families. The repossession order was granted on September 25, 2017 and it can be executed at any time. On the Sunday before the workshop, the Pedagogical Activities axis will hold a conversation with the squat leaders, actors of Coletivo de Galochas, who already work there, plus the ones selected for the activity, whose presence is mandatory.