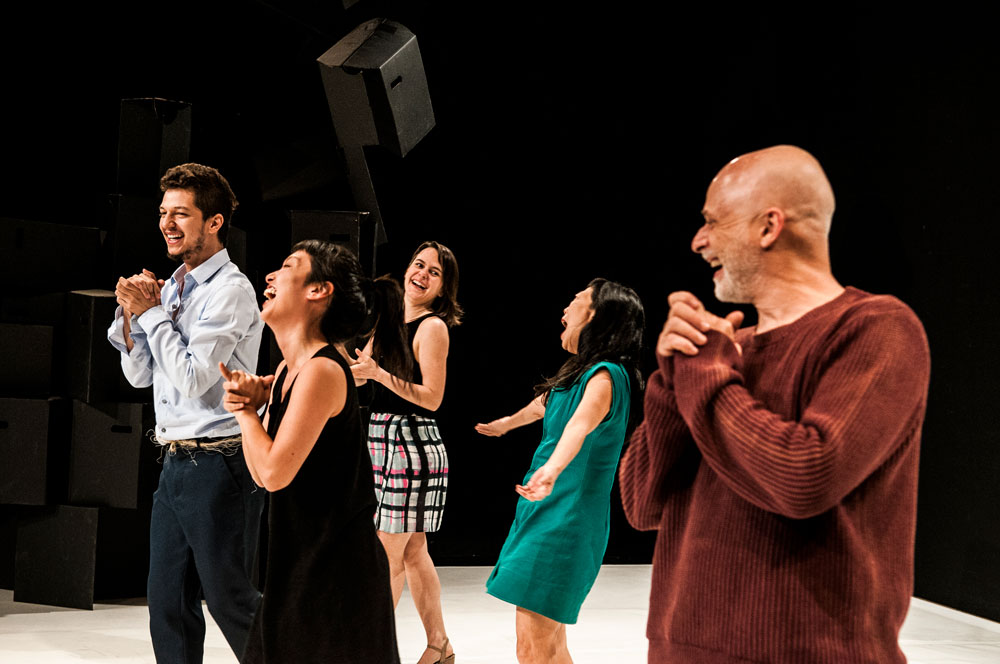 Laughter today is experience. Laughter today is a precipice. Laughter destroys today what it will destroy, the last bound that is left. Laughter today is common, blow, guts, heart. Laughter today. Laughter. Laugther, play and dance, creates a path to laughter’s materialization, as a happening in the body. What happens to both body and space when laughter laughs? Body, space, laughter, dance and playfulness gain diverse nuances and so assert themselves also as a movement of resistance — existence.

“Grace emerges from an inexhaustible source, which overflows the streams of human relations. Laughter is the last of blessings.” Laughter was part of the Horizonte project, contemplated by the Program for Promotion of Dance, of the São Paulo Municipal Culture department, and it was nominated to the APCA 2017 for best show.

key zetta e cia. is directed by Key Sawao — director, choreographer and dancer, with a background in contemporary dance —, and Ricardo Iazzetta — who graduated from The Juilliard School of New York and has a background in Oriental movement practices. The group emerged from the wish of adding other dancers and artists around the creations, also enabling dialogues and language research with a focus on dance and its possible interrelations.

key zetta e cia. has already produced 12 shows and won some of the most significant Brazilian research and dance awards, such as APCA (Paulista Association of Art Critics) Award in 2009 and 2013; Denilto Gomes Award and Bolsa Vitae de Artes 98 for choreographic research, Funarte Award Klauss Vianna, Cultura Inglesa Festival and Proac. The group was also nominated for the Governador do Estado Award in 2015 and 2018.