To inspire and be inspired by the sensitivity and creativity of people to generate transforming experiences in the world of Brazilian art and culture.

This is the mission of Itaú Cultural, defined by the guidelines of the Itaú Unibanco group, which considers culture a key tool to the construction of the country’s identity and an effective means to promote citizenship, democratize and encourage social participation.

Itaú Cultural supports projects within the contemporary panorama, as the MITsp – International Theater Festival of São Paulo, which features important international shows and other actions in the city – debates, forums and residencies – that will inspire and transform the Brazilian performing arts.

Established in 1987, Itaú Cultural is headquartered in São Paulo and is home to a variety of activities, always free of charge, as exhibitions and courses, exceeding the mark of 5000 and accounting more than 6 million people as audience. The actions explore research and production of content as well as mapping, fostering and dissemination of artistic and intellectual expressions, such as the Rumos program, which selected 1,130 artists in the last 15 years and has been renewed in 2013 for new paths in the development of the Brazilian artistic production and cultural fields.

Among other initiatives, the Itaú Cultural operates a virtual encyclopedia, dealing with such areas as visual arts and theater – a reference work with 6,000 entries and 12,000 images and about 13 million hits a year. The institute also promotes the Occupation project, highlighting the work of Brazilian referential artists through exhibitions and the recovery and preservation of collections.

Since 2011, Itaú Cultural is the manager of Ibirapuera Auditorium – through a partnership with the City Department of Culture – promoting weekly shows, for free or popular price, and maintaining a music school for young people.

The cultural exchange, conducted through festivals and international exhibitions, has proved to be of great importance for the culture universalization worldwide. Therefore, the State Secretary of Culture is very pleased to partner with events like MITsp, which shares our concern to promote quality cultural events to the largest number of people.

Throughout one week, the public will have access to shows never presented before in the country, coming from different places of the world. We seek to offer entertainment and fun for the population, as well as new experiences in the art field.

We celebrate the accomplishment of the 1st International Theater Festival, which brings the shows of significant international theater companies to São Paulo’s cultural centers and venues.

We wish everyone a great show!

The City Department of Culture of São Paulo is a partner in the accomplishment of MITsp, an event of great importance, which will gather significant international contemporary theater artists.

The city of São Paulo has a vocation and tradition for the theater. In the last 10 years it has been a reference of the experimental and group scene, nurturing a wide and plural production of recognized aesthetic qualities. The number of current shows, the revitalization of the theaters, the expansion of theater venues and cultural centers scattered throughout the regions can scale this.

Besides the shows, MITsp has also a set of special activities, such as meetings and debates, providing enjoyment as well as improvement of spaces and exchange of experiences between artists of different nationalities and backgrounds with local artists.

The shows will take place in several venues of the city, including the Cultural Center of São Paulo, João Caetano and Cacilda Becker Theaters. The program is completely free of charge, granting total access for interested people.

Telefonica | Vivo supports initiatives that contribute to the development of the country and society as a whole. It sponsors innovative projects that bring knowledge, diversity, entrepreneurship, creativity and have the ability to connect ideas and people with new experiences.

We believe in the power of sponsorship to encourage projects that bring great contribution in transforming the reality of the country, as well as to strengthen existing relationships and build new ones.

The Vivo EnCena is one of our culture spreading projects: A Vivo initiative to promote the exchange of performing art projects, aiming to contribute to the development of the country and society as a whole. The theater is understood beyond the spectacle, establishing audience-training activities, cultural inclusion and professional development, sharing inspiring stories, innovative concepts and transformative ideas in the field of culture. Vivo EnCena is held for ten years and it is present in 20 states across the country, besides caring out its own actions and curatorship at the Vivo Theater, located in the state capital.

Brazil, in general, and the city of São Paulo, in particular, have become an increasingly vibrant hub of research and artistic dissemination. The metropolis, which has one of the most vibrant cultural agenda in the country, hosts in this year the 1st International Theater Festival, consisting of shows, meetings, debates and other complementary activities. This initiative offers its contribution to local artists – who benefit from the possibility of exchanges with important professionals in the performing arts – and the public, which has the opportunity to meet and approach these productions of great relevance in the contemporary scene.

Aware of this movement, Sesc promotes the completion and circulation of different initiatives in its units in São Paulo – shows and artistic development activities. These actions are intended to stimulate the permanent contact with new works and research in art languages, such as dance, circus and theater, presenting proposals for different aesthetics and supporting innovative projects and ongoing dialogue with tradition.

By taking part on the 1st International Theater Festival of São Paulo, together with the International Centre for Theater Ecum and other partner institutions, Sesc reinforces its commitment to issues related to non-formal education and democratization of access to the various forms of artistic and cultural expression, encouraging critical and active citizen participation in society and providing reflection on current affairs, translated scenically. 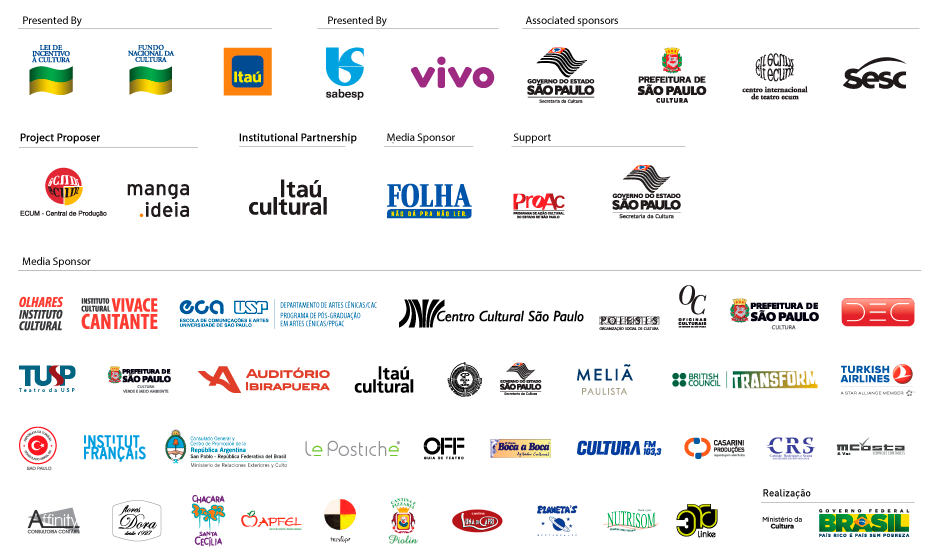