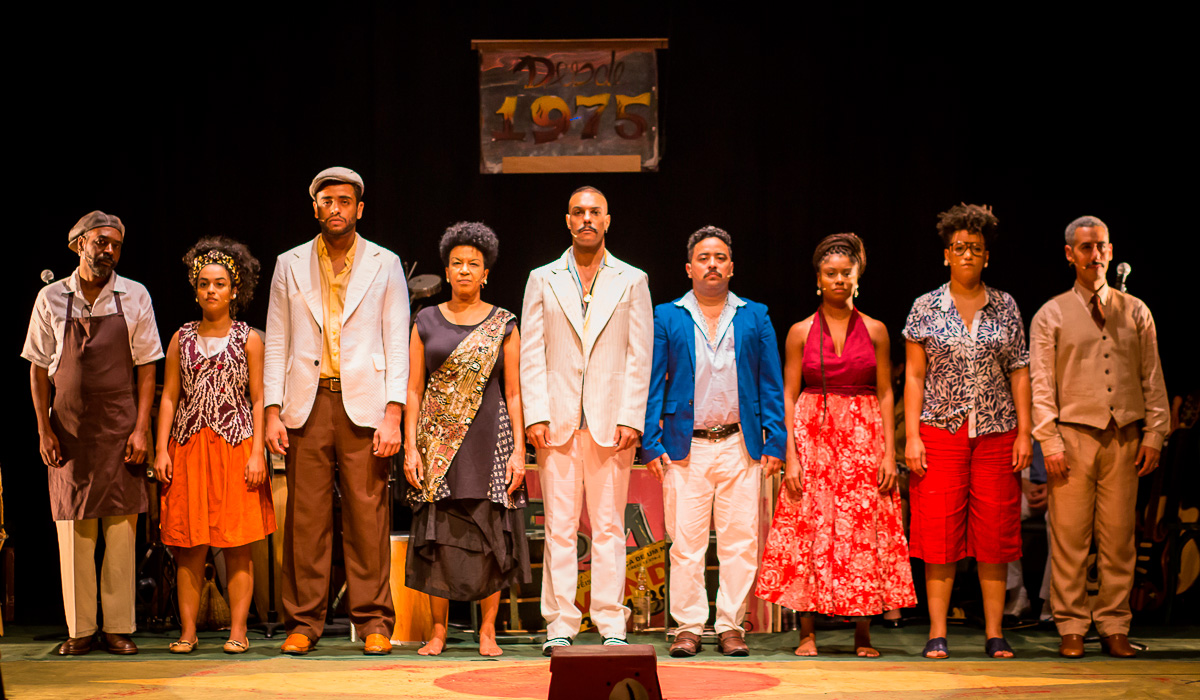 The Last Straw adaptation, a musical by Chico Buarque and Paulo Pontes, highlights the racial issues inserted in the 1975 work, which transfers the Medea tragedy to Rio de Janeiro’s suburb. If the original version debates the sociopolitical implications of the Brazilian military regime, the rereading by director Jé Oliveira blackens and updates the work: it brings a mostly black cast, showing the social and racial context of the characters (poor, residents of a housing estate), in addition to highlighting some aspects of African religions and black musicality – introducing African percussion instruments and elements of hip-hop. A Brazilian version of Medea, Joana is a middle-aged woman who finds herself left by her husband, the young samba player Jason, and about to be evicted from the apartment where she lives with her two children. Using a marital betrayal metaphor, the show highlights racial, social and class discussion based on the country’s current political moment.

Jé Oliveira is an actor, director and playwright, graduated from the Escola Livre de Teatro de Santo André, where he also taught drama classes. He is one of the founders of Coletivo Negro, a group focused on racial issues since 2008, He wrote the plays Farinha com Açúcar ou Sobre a Sustança de Meninos e Homens, {ENTRE}, Azar do Valdemar, Nóis, Taiô and Movimento Número 1: O Silêncio de Depois… Besides Coletivo Negro, he contributed artistically with many Brazilian groups. With The Last Straw {Black}, he won the APCA Award for Best Direction in 2019.

If the main issue of The Last Straw examines the odds of resistance and reaction by Joana (now performed by singer Juçara Marçal) in the face of the oppressor’s  crushing economic power, the answer given by The Last Straw {Black } is definite and materially inscribes itself in the form of the show: it is a way of compensating all black people who have been silenced and made invisible for so long (also on stage).

Director Jé de Oliveira confers the piece the racial adjectives imposed by the word, thus turning the musical into a kind of clamour from black and poor people – “treated like blacks” – subjugated by the dominant class shaped mostly by whites – “Or almost all white” – and financially well off. Boasting talent, the show makes a naked and raw portrait of a social problem that, more than 40 years after the play was written, has not yet been overcome.

We find not only black characters, but another thought about the plot and the theatre. The bodies there are not only the object of a popular narrative. They integrate an aesthetic that expands the play’s critical horizon. Edy Rock would say, in this great theatrical quote: “I was the flesh / now I am the razor itself”.