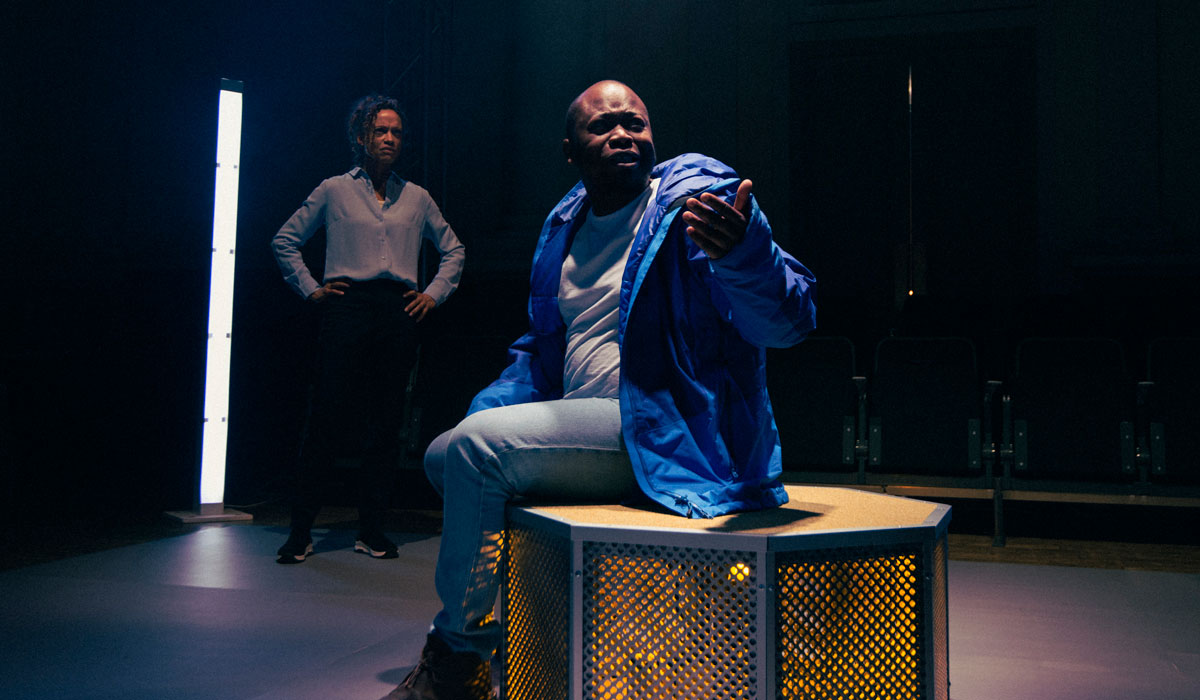 First partnership between director Mark Maughan and playwright Tim Cowbury, the show explores the flaws and injustices of refugee asylum systems. The play starts with Serge’s story, an exile from Congo, who comes across a British immigration officer. The conversation, initially friendly and welcoming, soon proves to be somewhat cut short. Despite knowing the refugee’s language, the agent does not seem to understand him or let him tell his story. Disagreements increase with the arrival of a second officer, who does not speak Serge’s French, and the interview of the immigrant, with bureaucratic questions and misinterpretations. In a comic and absurd tone, the narrative invests in the strength of the text, full of word games. Thus, it questions the purpose of asylum organizations, bound to a Kafkaesque system – the title of the play, by the way, is a reference to The Process, by Franz Kafka–, and debates our lack of listening to the other.

Playwright Tim Cowbury is one of the founders of the Made in China group, he was part of productions such as Get Stuff Break Free (National Theatre), Gym Party (Battersea Arts Centre) and Double Double Act (Unicorn Theatre), he studied dramaturgy at the Royal Court Theatre and coordinated writing groups at the Arcola Theatre and Battersea Arts Centre. He holds a master’s degree in dramaturgy from Goldsmiths University, where he received a research grant in arts and humanities. Director Mark Maughan studied modern and medieval languages at the University of Cambridge and holds a master’s degree in Theatre direction from the University of London. He staged shows like Unwritten Letters (Bush Theatre) and C’Est la Vie (The Coronet Theatre). The Claim’s research, the first collaboration between Cowbury and Maughan, also developed to the video installation I Am Just My Words, a series of interviews with immigrants who sought asylum.

The Claim is a masterclass in the pitfalls of language, a taut, funny but ultimately massively unsettling piece of work which is a stark and vital reminder of interpretation, viewpoint and how our black and white systems don’t make enough room for vulnerable people.

Then confirmation-bias, basic ignorance and time-pressured reactions ensure that the Kafkaesque proceedings darken in a memorably horrible way.

Cowbury makes a host of points. One is that language is always a minefield: even when the two officials call themselves “partners”, the word is open to various interpretations. Cowbury also suggests that no one in authority really listens to what others have to say: while Serge’s life is at stake, the two officials are playing their own power games or dwelling on the holiday potential of the Greek island of Ios. And how, the play asks, can they possibly gauge the truth of Serge’s story when they admit to embellishing their own narratives?

SUPPORTED BY THE BRITISH COUNCIL AND CULTURA INGLESA