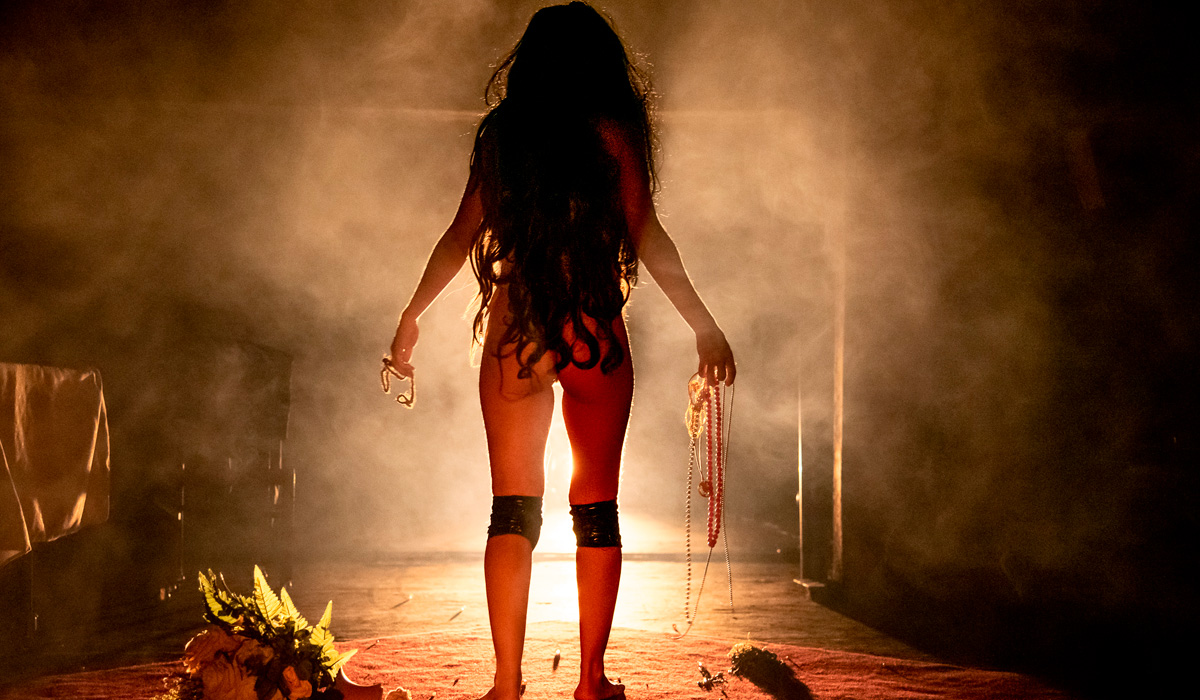 The show, whose work in progress was presented in the previous edition of MITsp, is part of Janaina Leite’s broader research about the real in theatre – now focusing on the obscene. From the theoretical text Stabat Mater (in Latin, there was the mother), by philosopher and psychoanalyst Julia Kristeva, the artist and researcher proposes the format of a performance-lecture about women, going back to Virgin Mary’s story, trying at the same time to account for her mother’s deletion in her previous play, Conversas com Meu Pai. Escorted by her own mother and the figure of Priapus, a character performed by a porn actor, she radically articulates historically conflicting themes such as motherhood and sexuality. Having terror and pornography as aesthetic bases, Leite examines the origins of a historical deal between the feminine and the masculine, which the work tries to disarm without first taking risks and facing the systems of orgasm and pain securing these positions.

Janaina Leite has a consolidated research on documentary and autobiography in Brazilian theatre. She is currently developing her Performing Arts PHD supported by Fapesp, at Escola de Comunicação e Artes (ECA/USP). She created the shows Festa da Separação: Um Documentário Cênico, Conversas com Meu Pai and Stabat Mater, for which she was nominated, in 2019, for the Shell Theatre Award in the dramaturgy category. She published the book Autoescrituras Performativas: do Diário à Cena, reinforcing her research in documentary theatre. Leite idealized and coordinated the study groups Feminino Abjeto 1, Memórias, Arquivos e (Auto) Biografias and Feminino Abjeto 2. She is also co-founder, actress and director of Grupo XIX de Teatro, with whom she created and performed in several shows recognized by the main awards and support funds in the country.

The enacting highlight which, in fact, starts from a huge authorial text, is the clash proposed by the author, systematically, patiently and generously between reality and representation. From simple extremes, such as the strong effect of the fake slap in the face, to epistemological ones, such as the intangible real, or the endless trauma, there is an honest and diligent effort to show the story of a vertical exploration of truth’s being and suggestion. Yes, perhaps this is no longer theatre in many aspects, but it is subversive mainly because even without any personal or artistic modesty, it succeeds to represent the unrepresentative it challenges.