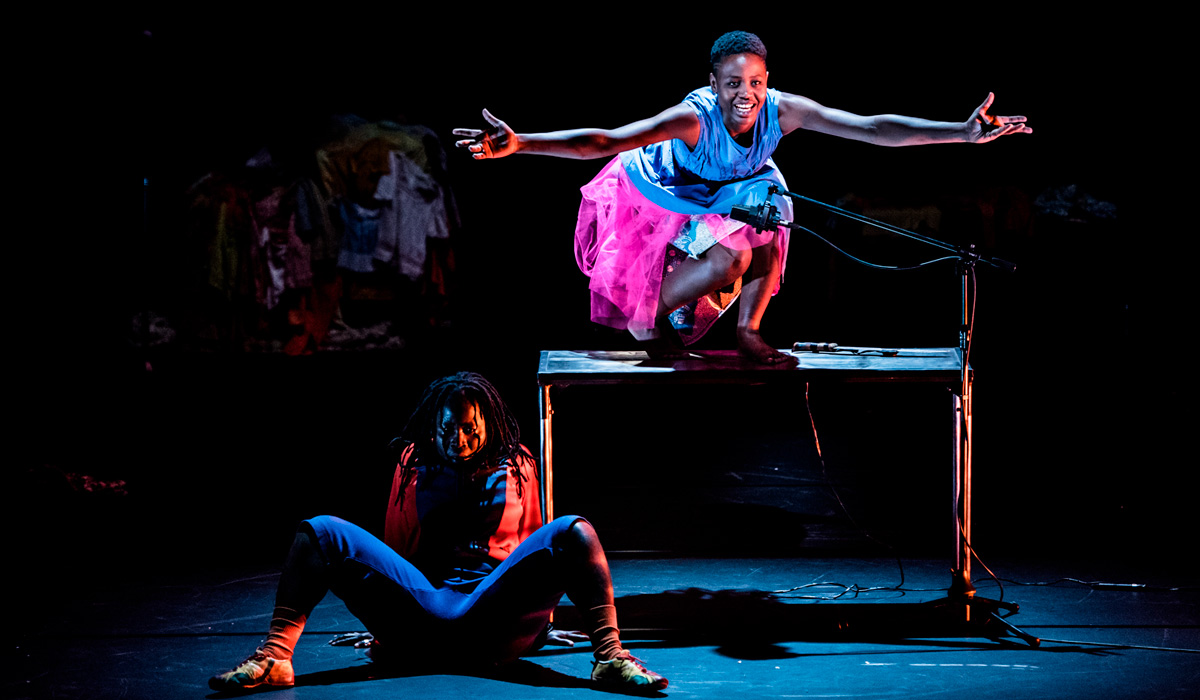 Through her childhood memories, Rwandan Dorothée Munyaneza recounts the civil war that ravaged her country in 1994, leading to the genocide of 800 thousand people. The artist was almost 12 when she found herself in the midst of war, since then she has not been able to listen toSamedi Détente (something like Relaxed Saturday, in French), a radio show that shook the country’s entire population with songs from all over the world. Though the songs from that time still revisit the artist’s mind and body, bringing the memories of friends and family. In a kind of scenic testimony, Munyaneza tries to elucidate the horrors of the conflict through these emotive memories. Her war stories’ narrative is a mix of theatre, dance and music and brings elements relating to the conflicts’ routine, such as tables and canvases (used as shelters against the shootings) and various layers of clothes (her shields).

Born in Rwanda, Dorothée Munyaneza left her country at the age of 12 during the 1994 civil war. She settled with her family in England, where she studied music at the Jonas Foundation and social sciences in Canterbury. She soon after moved to France, where she produced works as a musician, author and choreographer. Her works come from real events to capture their echoes in the memory and in the body, individually and collectively, giving voice to those who have been silenced. In 2004, The artist composed and performed the soundtrack for the film Hotel Rwanda, by Terry George, and six years later released her first solo album, recorded with producer Martin Russell. With Saturday Trigger, her first play, she founded the company Kadidi in 2013, and premiered her second show, Unwanted, at the 2017 Avignon Festival. As an associate artist at the Théâtre de la Ville, in Paris, she presented along musicians Benjamin Colin and Daniel Ngarukiye the concert-performance Woad, in 2019. Munyaneza’s next work, MAILLES, will bring together Afro-descendant artists from around the world and is expected to premiere in October 2020 in Chaleroi, Belgium.

Munyaneza speaks and sings, occasionally jumping on a table of the sort that she and her friend used to cower under, she is joined by the Ivorian dancer Nadia Beugré and the French composer Alain Mahé. Their efforts should make the piece particularly theatrical, translating real-life events into visceral sound and image. Instead they suggest how metaphor can fail in the face of such atrocity. (…)  It’s almost impossible to imagine a sound, a step, a symbol that could convey the horrors that Ms. Munyaneza so matter-of-factly details.

For this bulk of elegant actions, also for this incredible zouglou dance piece (a mad and comforting choreographic scene) that Nadia Beugré (sublime Ivorian dancer) and Dorothée Munyaneza disperse over the stage, the show proposes an intimate contrast to the history books.