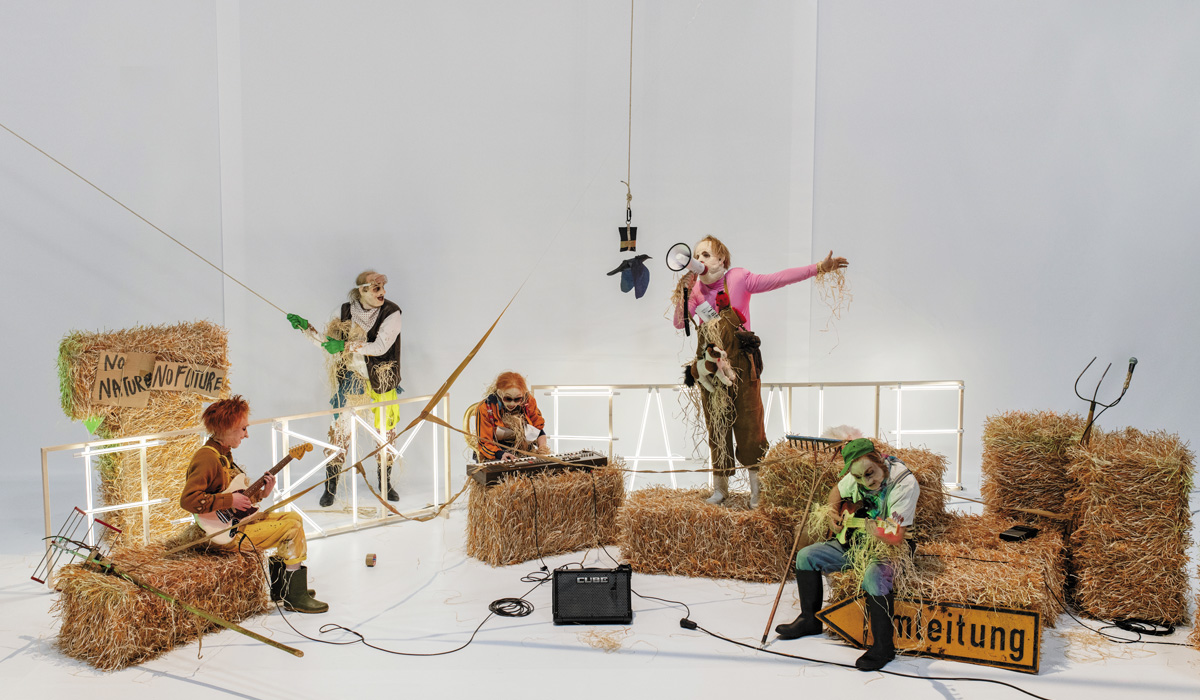 In Farm Fatale, director Philippe Quesne evokes the imaginary of country life. But this rural space, once idyllic, now appears in a dystopian future already completely abandoned. The sounds of nature dissipated, birds and insects disappeared and people left. There is only a group of scarecrows left, five ingenious figures who try to remember the past and, little by little, fill this empty place. They bring elements to the naked stage, join together in an independent radio program, make music, discuss environmental problems and even throw themselves into philosophical questionings. Masked, with a distort voice and an unbending walk, as if they were zombies, these characters use humor and irony in the search for a new beginning, in the utopia of a new and better world – a world without people.

One of the leading groups on the German scene, Münchner Kammerspiele has operated since 1933 as Munich’s municipal theatre. Along their work the group seeks dialogue and a confrontation with the present and invests in an innovative, contemporary and cosmopolitan aesthetic, with a sociopolitical focus. In 2015, when Matthias Lilienthal took over the Theatre’s artistic direction, the institution sought to expand its artistic range, working with acknowledged people and younger talents, in addition to inviting directors of diverse nationalities, such as Philippe Quesne, Rabih Mroué and Toshiki Okada. In 2019, Münchner Kammerspiele was elected the Theatre of the year by the magazine Theater Heute. Farm Fatale, is Quesne’s second staging within the German institution – the first was Caspar Western Friedrich, in 2016. With a degree in visual arts, the French director worked for ten years developing sets for theatrical shows, operas and exhibitions. When directing he creates shows with a strong connection between space, set and the bodies on the stage. In 2003, he founded the Vivarium Studio group, bringing together actors, visual artists and musicians, in a research placed between the playful and the melancholic. Since 2014, he is the codirector of the French theatre Nanterre-Amandiers.

Farm Fatale, by Philippe Quesne, shows a bucolic and bizarre enacting, full of wonderful jokes, but in which the utopia of a better world also appears. A world without people. Honestly: global warming, species extinction – we humans spoiled everything! It could be really better if the planet started all over again. In the empty room. And without us.

Everything is a wonderful absurdity, the five of them talk nonsense about bees – “Let It Bee” -, while there is a special joy, even though we really find ourselves in a desolated apocalypse. But the scarecrows give hope (…) ending up in a world that may no longer exist, but from which something new can emerge.

No very strange ideas, no ridiculous wordplay, no overly trivial gestures, no highly naive conclusions. Thanks to his small and democratic society of scarecrows, Philippe Quesne draws a depiction of ourselves.