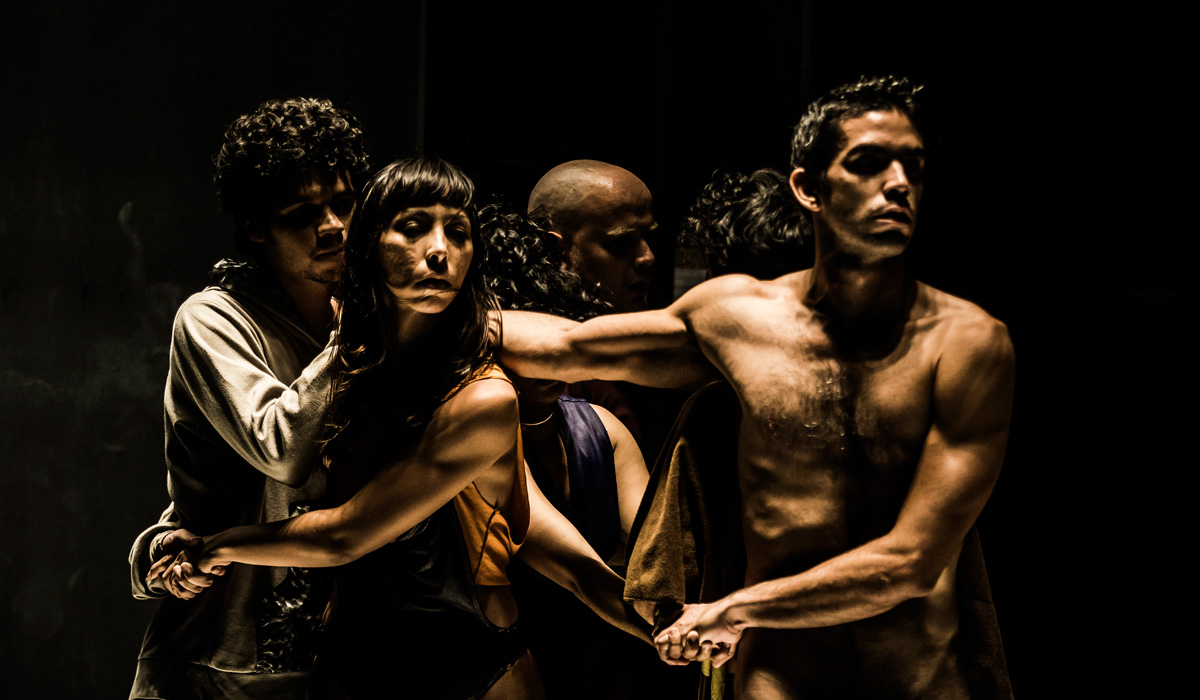 WORSTWARD ON traces a vertiginous path about what it means to live in society, especially in the current sociopolitical moment in Brazil and the world. Holding hands, the six performers move each in their own way, forming an amorphous mass, always united, but confused and disconnected. As if they wanted to walk ahead and together, even if they do not get anywhere or can no longer stand the route. Like the end of party, an end of hope, but which does not paralyse, on the contrary: in despair, one always tries to react, even if one is only digging its own grave. Resulting of the dialogue between Inquieta Cia. and artists Marcelo Evelin and Thereza Rocha, the show moves among languages (theatre, dance and performance) and it derives from studies on the dramaturgy that arises from the body, its gestures and expressions, and resonates beyond it.

From Ceará, Inquieta Cia. does not stick to functions or references in its research and artistic activities. It invests in collective concepts and in works that mobilize the artistic status and society, dealing with the uniqueness and diversity of bodies. Amid it works are Metrópole, Esconderijo dos Gigantes and WORSTWARD ON. Since 2016, research over PIOR (WORST) has generated other materials, such as the performance installation Derivações do PIOR, the photographic exhibition \Ainda PIOR de Novo\ and the \arquivo do PIOR\, published in the magazine VAZANTES invited by Universidade Federal do Ceará, which resumes the research and its actions. The group also acts on education, offering courses and workshops-performances.

The work is touching violence, sometimes euphoric. Always continuous, and although at times it seems muffle, it is never settled. Moving on, even if we fall apart. It is the utmost metaphor for the human condition as they show us.

Forwards the Worst does not involve making believe. There is the work: alive and present. Figurative language and demonstrative movement do not fit, and the six performers know it. The work gains power precisely by sincere repetition, by spontaneous movement. The show is only worth the sweat spilled onstage. That’s all.

And I saw myself that way: pushed, asleep, carried, hypnotized, wrecked, gagged, kneeling, dumb, locked, flogged. And it’s been like this … Worst of all, it’s not just me! There were so many people there. The whole humanity, the whole life, the whole existence. The more I saw myself, the more I saw others in me. What is left? See yourself. Gratitude makes her Restless. Life it is. A must-see!

ROSA PRIMO, dancer and teacher of the UFC Dance course